Spirit in a time of remembering

I’ll admit to having a hard time winnowing my lists of online reading; I want to, I really do, but new wellsprings of worthy writing keep appearing.  One of the latest is a spin-off of Killing The Buddha, a long-established fount of reflections on spirituality in our culture.  On the new site, freq.uenci.es, which I glance at once a week (it’s part of my “Tuesday” tab set), this hit me like a ton of bricks:

The present epoch is historically unique in that the spirit-side of life can no longer be taken for granted. It appears both in innumerable fragmentary shapes and as massive blocs of fundamentalist and totalizing conviction, and quite often it seems to not exist at all, as though there were some kind of systematic power at work to drive it out of our lives.

Indeed! Call it consumerism, media overload, mechanistic thinking, or simply lives too full of things to do and places to go; the end result for too many of us is a fragmentary relationship to spirit, and for more still, a disengagement from what has been, for most of human history, the central unifying thread of individual and community lives.  But what do we mean here by “spirit?”  Joel Kovel begins this essay, entitled spirituality, revolutionary by laying it out out about as concisely as I’ve ever seen:

In all places and all epochs human beings have used some such word as “Spirit,” to designate the animating, world-moving force within them; the relations with ancestors, demons, totems, ghosts and other “spirit-beings”; and the Supreme Being, the godhead that permeates the universe and creates the world and is bound together in our religions. In sum, what has been known as spirit relates the human self to the universe and all its beings and forms of being. Spirit is no residual category, then, but an ontological potential of humanity, a vital part of being human. It is as essential for human nature as building a web is for “spider nature.” For all creatures are inserted into nature at a certain point and with a certain internally articulated set of relationships. These frame the possible arrangements that creature has with the rest of nature.

No doubt one reason Kovel’s piece hit fertile ground in me this week is that I’m currently re-reading David Abram’s most recent book, Becoming Animal, which can be seen as taking that final thought above and running with it: into the wilderness, around the world, and deep inside our own engagement with the landscape around us. Abram reminds us of one way back to spirit: by coming alive in our bodies within the larger body of the earth.  And more than that: he questions our cultural conviction that our experience of the world is somehow an interior thing, each of us with our own skull-encapsulated mind, which may be just an ephemeral consequence of purely mechanical neural activity. What a lonely and hollow way to experience this essence of what it is to be human! Reflecting on the obvious communicative interactions among all the living things of the world, Abram suggests:

Mind is not at all a human possession, but is rather a property of the earthly biosphere—a property in which we, along with the other animals and the plants, all participate. The apparent interiority that we ascribe to the mind (may) have less to do with the notion that there is a separate mind located inside me, and another, distinct mind that resides inside you, and more to do with a sense that you and I are both situated inside it—a recognition that we are bodily immersed in an awareness that is not ours, but is rather the Earth’s. 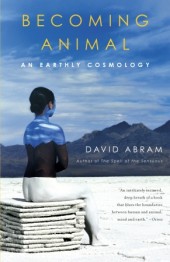 Never fear: Abram’s “mind” is far more than our thinking selves. His renewed animism aims deeper, reminding us of traditions, science findings, and direct experiences that suggest a deep coherence, a world in which the western split between spirit and matter is rejected, bridging the great divide created by Descartes’ declaration that the human mind (and spirit, the “I am”) stands apart from the entire material world.  Instead, we are invited into a remembrance that our local habitat is a “diversely differentiated field of animate beings, each of which has gifts relative to the others.  And we find ourselves not above, but in the very midst of this living field, our own sentience part and parcel of the sensuous landscape.”  All the miraculous wonder of our earthly creation (and in a subtler way, also the sun and cosmos beyond) sharing a fundamental commonality of reciprocity and mutual engagement in which “our own sentient organism is…an intensification or fluctuation within the sensitive flesh of the world.” This is an embodied spirituality both ancient and utterly revolutionary in our modern world.

More after the break: (image above right: Lydia Larson)