← My ears will never be the same
The Real Work →

Elton rocks it at 60

I’ve been slack about filling out the BBB category of “rock elders late-career DVDs.”  But tonight I’m back on the case after getting a bit of an Elton jones after seeing Brandi Carlile and her really good (and a bit crazy) band last night – Brandi’s worked with Paul Buckmaster, you see; and whatayaknow, Elton encouraged her, and Stills, too! 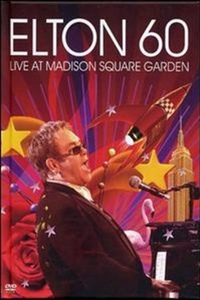 So, anyway, this DVD been on my shelf waiting to be written up for awhile now.  In 2007, Elton celebrated his 60th birthday by playing his 60th show at Madison Square Garden.  But this wasn’t a typical Elton concert, and certainly not the show he’s settled into in his residency in Vegas. The three-hour extravaganza dug deep into his early catalog, with only 8 of the 33 songs originating after 1975 (and 17 from Don’t Shoot Me and earlier), making this a great treat for those of us who love the classic Elton-and-Bernie years, but haven’t found much use for the later Elton (but note: The Captain and the Kid is worth a listen, and this electro remix album with Pnau, sampling from his whole career, hit #1 in the UK this summer).

The band features his old mates Nigel Olsson on drums (“Nigel! Outasight!”) and Davey Johnstone on guitars and mandolin; the arrangements are laced with cello from Martin Tillman, along with a huge youth choir.  Elton’s vocal commitment and intensity shines throughout (though his range has definitely shifted lower since his heyday), and his playing is rich and rollicking.  Rarely performed old gems include Where to Now St. Peter, Ballad of a Well-known Gun (“we haven’t played this one for maybe 30 years…”), High Flying Bird, and (yes!) his beautiful ode to New York in the early 70’s, Mona Lisas and Mad Hatters. Here’s a taste, picking up in the climax of Holiday Inn, with maybe my favorite jam of the show: cello, mando, piano (sorry, Flash-less tablet viewers; YouTube’s time-stamp embed doesn’t work with their html5 code; skip to 1:50!):

Other highlights include the great revolutionary anthem Burn Down the Mission (by turns majestic, angry, longing, and determined) and a nice guitar/piano/cello jam at the end of Levon.

The last hour of the show, while not lacking in energy by any means, slips back into what seems to be his more standard repertoire, and becomes noticeably less compelling.  But skip on through to the climactic Funeral/Love Lies Bleeding, in which Elton and the band feed off the energy of the night to bring it all to a rousing close.

The video editing is excellent, dynamic but never distracting or frenetic, shifting fluidly between arena-wide shots of the stage and backdrop videos, tight shots of Elton’s hands dancing the keys or face as he sings, the sidemen (especially Davey, Nigel, and kids in the chorus), and the audience – a mix of random folks dancing and singing along (with a concentration of Gay New York early on), and mostly more subdued celebrities including Ozzy and Sharon Osborn, Michael Caine (!), Brian Wilson, a singing and phone-recording Anne Hathaway, and Bill Clinton.

The double-disc DVD is wonderfully rounded out with a generous helping of 24 archival videos, many of which are a real treat, too.  A 1970 Border Song, in the classic TV music show style of the era, has fans sitting real close all around, and Sixty Years On from later the same year features harp and chamber orchestra.  And from the live debut of Honky Chateau, a fresh Mona Lisa shines (Davey on mando, Dee on sweet bass): “I thank the lord for the people I have found…”

← My ears will never be the same
The Real Work →