The year of comets begins

Astronomers entered 2013 with an unusual level of excitement about several comets that will be visible to the naked eye this year.  The first two are currently shining in southern hemisphere skies, one of which, Comet PanSTARRS, should remain visible as it moves into northern skies later this month.  Check in with AstroBob for updates as it continues to rise higher in our skies through March; as he notes, “On the 12th, a thin lunar crescent will shine just to the right of the comet (which) will it make finding this fuzzy visitor easy-peasy.” 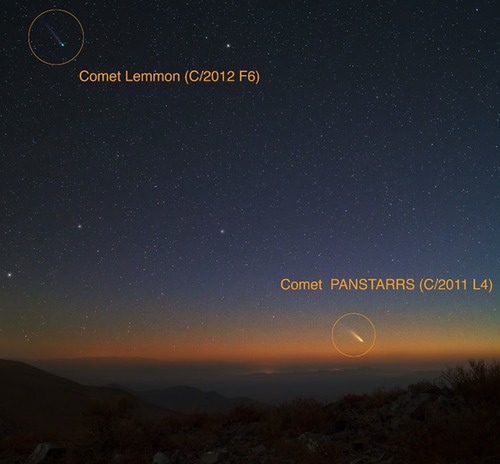 These two are the opening acts for the year’s Main Event, which will unfold toward the end of the year.  Comet ISON may be spectacular, one of the brightest objects in the night sky, perhaps even visible in daylight; or, it may disintegrate as it makes its close passage by the sun.  Only time will tell!

UPDATE, 7/31/13: Comet ISON’s prospects are looking quite a bit more downbeat as it continues to make its way toward the inner solar system.  Ever since the beginning of the year, its brightness has remained constant, indicating that it may not have much material to melt off as it nears the sun. It still has a nice tail out there, but its lack of growth leads many astronomers to doubt a truly historic outburst is in store, even if it does survive its close encounter with the sun. Others suggest that we’ll know more by a month or so from now, after the comet crosses the “frost line” and ice begins sublimating off its body, which should trigger new brightening if the comet has it in it.  Stay tuned….