Depth roots us in the world 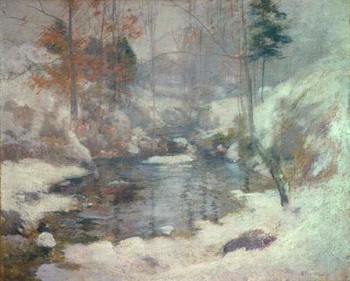 The moments we enjoy most as they unfold, and that we treasure long afterward, are the ones we experience most deeply. Depth roots us in the world, gives life substance and wholeness. It enriches our work, our relationships, everything we do. It’s the essential ingredient of a good life and one of the qualities we admire most in others.

“I just couldn’t take it anymore in Santa Barbara—or Hell, I call it,” he was saying.  “When you’re thinking about getting out of Hell, you tend to think about. . . let’s see. . . Heaven!  And I was lucky enough to have Heaven well-marked in my brain.”

“And a direct path between Hell and Heaven,” I noted, “that’s quite a trick!”  So he’s back; twice before he’s lived within five miles of this place for a year or more, and it’s time again.

As for me, it’s a touchstone in the pulse of seasons.  Two or three times a year I return to these earth-warmed waters for some of the deepest recharges I’ve found in this life; it’s gotten amazingly consistent, to the point that now I pretty much count on the nourishment that I’ll find here.  Hmm, that sounds like the first inkling of trouble—I guess it all depends on how I meet what comes: this time, next time, every time.

Here in the wintry depths of the year, the sun is low all day through the forest as I head down from the car.  It’s been fairly warm, so the stream is virtually ice-free (just a few dangling fingers along the bottoms of some boulders, suspended above the water line).  Today I move right across the canyon bottom, and head on up the far slope.  Pause at the first crossing of the little stream flowing down from the springs, where the fireflies danced one late spring night (the seasons are always out of synch in this little three-by-six-foot zone, never fully winter, summery expressions by April).  Fingers slip into the flowing warmth; green grass (!), snow-laden pine bough, browned-but-supple tendrils of last year’s growth. A moist grey boulder presides over little pool, edged by a patch of bright watercress.  Up the slope a ways, ice under last night’s light snowfall makes me focus intently on each step, the forest around receding as my attention turns to the ground below and just in front of me.  Gotta remember to remember this on the way down!

Quite a crowd at the pools, for a weekday afternoon: a chatty Asian party (I feel a bit ignorant not knowing if that’s Japanese, Chinese, or Korean being spoken….), a couple urban anglos, a young hippie (short hair, but his open face shines softly, a subtler freak flag flying), and a quiet Hispano-Indian guy sitting up by the cave.  The hippie, who turns out later to be the one who’s returned to his Heaven, calls up, “welcome to the springs. . .”

“Thanks, it’s great to be back,” is the reply, true and simple.

But as usual, before sinking in, I head up the slope above the waters. This magical forest is at least as much a draw as the hot springs.

END_OF_DOCUMENT_TOKEN_TO_BE_REPLACED

Hard to plan the day

But every morning I awake torn between the desire to save the world and an inclination to savor it.

This makes it hard to plan the day!

Welcome to the Golden Tablet Age of long-form journalism

Just when it seemed that journalism had been reduced to pithy two-paragraph blog posts and three-minute TV news or website video snippets, with 15-minute “in depth” reports on 60 Minutes being the height of investigative insight, a shining light has appeared through the clouds!

Fueled largely by the emergence of the Kindle as a place to read during down-time without staring into a glowing screen, and further encouraged by the more recreational media browsing that’s become popular on the iPad, “long-form journalism” is making a dramatic comeback in this age of bite-sized news.  Thanks to several excellent editorial aggregators, lovers of the well-crafted essay, compelling profile, and in-depth on-the-ground reporting from around the globe now have easy access to the best work of the world’s best journalistic writers.   Drawing from current print and online publications, as well as the archives of such stalwarts of the form as The Atlantic, The New Yorker, The London Review, Vanity Fair, Foreign Affairs, and many more, these sites offer a treasure-trove of writing that’s well worth settling down with for a half hour or hour. 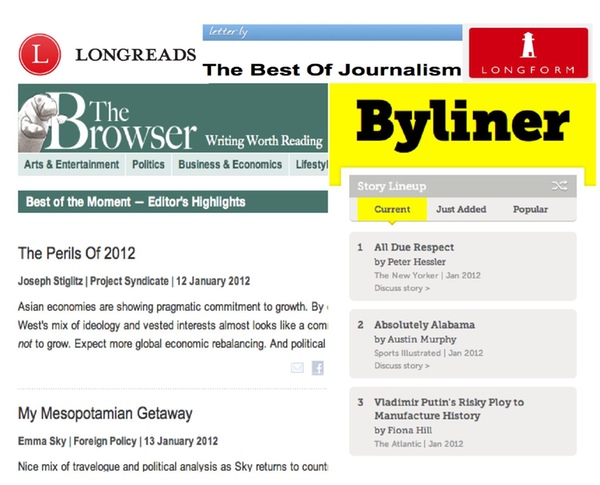 From these sites (links below), you can check out the opening sections of their latest recommended items and load the full pieces in your browser, then send them to your Kindle (with readily-available plug-ins), add them to your Read It Later or Instapaper reading list, perhaps to be accessed from your iPad or laptop some evening or weekend, or, of course, read right on your computer.

Just as a taste, today’s top selections include a Foreign Policy piece by a recent visitor to Iraq, a new Atlantic piece on Vladimir Putin’s risky game of bending history in Russia, a Grantland look on concussions in high school football, a piece from Businessweek on the inventor of a revolutionary new sneaker that never made it to market, and an Adbusters look at “peak nature.”  Oh, and an old 1952 tour of trailer parks and a new Sports Illustrated profile of Michael Jordan’s high school coach.  Longform’s Best of 2011 included an incredible 3-part cautionary tale about Derek Boogaard, an NHL “enforcer,” a heart-wrenching story about Vaughn, Georgia, one of the towns wiped from the map by last year’s tornado swarms, one on a blind man who learned to navigate his world by echolocation, and a visit to a crazy Russian movie set, home to thousands. While no one will be interested in all of this, a weekly perusal of these sites is sure to reward every reader with a few gems.

I encourage you to check a few of these editorial sites out, and see which ones strike your fancy over time.  I get something from them all.  Byliner is the most reliably

END_OF_DOCUMENT_TOKEN_TO_BE_REPLACED

Ah, another real surprise from my Netflix streaming queue!  Tonight, I clicked on CSNY Deja Vu, Neil Young’s movie of the 2006 tour that came together in the wake of Neil’s album, Living With War, expecting to find a concert film with a few topical touches around the edges.  Woah, Nellie, was I off base!  Instead, the four old hippies play supporting actor roles for a slew of Iraq and Vietnam war veterans and family members in a pean to the hearts and souls of those who’ve followed their leaders into battles that, in the end, just didn’t make sense. Neil even got Mike Cerra, a CNN reporter who spent three tours with a unit in Iraq, to “embed” with the tour and provide a documentary-within-the-movie about how people reacted to the tour, in the midst of that heated “you’re either with us or with the terrorists” period in America.

I suppose this shouldn’t have been such a shock.  While Neil’s album got the most attention for two rousing anthems, Let’s Impeach the President, and Looking For a Leader (presaging the 2008 primaries: “…maybe it’s a woman, or a black man after all…”), at its heart were five moving songs honoring the sacrifices and eternal burdens of our men and women in uniform.  One was a sung from the point of view of a soldier who didn’t return, wishing he could be with his family (clip on YouTube); the title track sang for the internal and external wounds, “I’m living with war….every day…in my heart…..in my mind; I take a holy vow, to never kill again, to never kill again…” (clip on YouTube; also not available for embed)

With the movie, Neil took this theme and moved it front and center, creating a moving portrait of the costs, and the folly, of war, and celebrating anti-war veterans from the 60’s and the 90’s.  The songs become interludes, a thematic backdrop to the human story; we generally hear just a verse or two of most of the tunes, both new and old.  At the movie’s climax, “Find the Cost of Freedom” is transformed from a hymn of resistance into a requiem for every soldier killed in Iraq up til then, vets singing along, moms in tears….and as on the album, the encore during the fade-out is David, Stephen, Graham, and Neil bringing their celestial harmonies to bear on “America the Beautiful.”  These old songsters remind us, and the younger generation, that the hippie vision was always about the deep, true heart of the dream of what American can, and should, be.

I finally got around to watching Howl, the movie made a couple years ago about Ginsberg’s poem, the obscenity trial (Ferlinghetti, the publisher, was the defendant, not Allen), and…and…..well, that’s where I had no idea.  This is an incredible portrayal of the artistic quest, the reaching to grasp that which is untouchable and express the ineffable, as well as the inner journey to know and to embrace ones’ self and soul.

The movie invites us deeply into the heart of the young Allen Ginsburg, via segments featuring his famous first reading of Howl, and a series of reflections posed as an interview in his apartment while the trial was taking place, in which Ginsburg shares bits of his life and glimpses of the passion and the craft behind his evocations of the holy mystery.

Howl is streamable on Netflix (where the “This Film Is” two-adjective description nails it: “Cerebral, raunchy”).  Go for it.

Ten times a day something happens to me like this – some strengthening throb of amazement – some good sweet empathetic ping and swell.

This is the first, the wildest and the wisest thing I know: that the soul exists and is built entirely out of attentiveness.

Mary Oliver
(can’t find the source, though it appears to be prose, in that every time it appears online it has no line breaks.)