OK, so you want to land a big new versatile rover on Mars. Too big and heavy to use just a parachute, or even the giant bouncing blow-up pillow thingy from the last round of rovers, which were half the length and one-fifth the weight of the new one, which is dubbed Curiosity, and more formally, the Mars Science Laboratory. How's about we use the good ol' detachable heat shield with directional rockets to steer the thing as it careens into the atmosphere, a crazy-strong-but-light Supersonic Parachute, and a set of powerful retrorockets, then transform the whole unit into a Sky Crane that can gently lower the roving lab down then zip away before it fries its cargo? Oh, yeah! We got it!

Next week, Curiosity arrives at Mars, aiming to land right next to a mountain that rises inside a crater, revealing 3 billion years of Mars' sedimentary history. This NASA video – edited with far more pizzaz than most of theirs, definitely giving the talking head engineers more of a intense hero vibe than the geeky teacher thing I'm more used to from them – tells the tale of the “Seven Minutes of Terror” awaiting young Curiosity after it enters the Martian atmosphere:

And for a bit of added fun, Mars is hanging there in the evening sky for all of us to look up at and imagine Curiosity speeding toward. It'll land (or fry or crash) after Mars sets on August 5, but if all goes well, for the next few weeks, we can look up and see where our newest scientific emissary is doing its job, sending photos and videos offering a close up look at that rocky orange orb in our evening sky.

UPDATE, 8/6/12: Success! AstroBob has ongoing coverage as the images start rolling; one of the orbiting Mars probes was even perfectly situated for a look at the landing!

When checking out Mars in the evening sky, you'll see three very different celestial denizens, two of them pieces of our extended solar body and one a relatively nearby galactic neighbor of our own star. Mars is, of course, a small rocky planet fairly close to Earth, trailing along behind us in the orbit just beyond ours as we slowly pull farther ahead of it on our “inside track” around the sun (which hides there a ways below the western horizon); Saturn is a ringed gas giant halfway across the solar system way out beyond the asteroids and Jupiter, now about six times farther away than Mars; Spica is a massive binary star on the other side of our galactic spiral arm. But this month, they all shine with just about equal brightness. As Curiosity settles in to its new landscape….

I’m beginning to wonder how I even managed to delve into new music before Spotify came along.  Oh, sure, the radio can tease you with a song or few from a new album, friends made tapes or shared their latest LPs, yeah, but there’s nothing like cueing up an entire album to really sink into all the fresh goodness within!  Thanks to Spotify, when I read an enticing review or hear something on the radio or NPR that catches my ear, it’s right there ready to hear.  Sure does add a bounce to my step while I do the dishes and sweep the floor!

A few recent highlights of my 2012 playlist:

Caetano Veloso and David Byrne, Live at Carnegie Hall.  Veloso’s gentle Brazilian guitar and vocals make for a classy and warm match for Byrne.  Seven Veloso songs are followed by six of Byrnes, then a few back and forth to complete the show.

Bruce Springsteen, Wrecking Ball; Ani Difranco, Which Side Are You On; Amy Ray, The Lung of Love; Patti Smith, Banga.  I especially appreciate being able to hear the latest from old faves, without having to add to already extensive sections of my CD closet.  I’m really appreciating the “ephemeralization” of my music jones: no longer do I need to buy actual physical “stuff”, not even a few megabytes of hard drive space…I’m starting to get over not holding it in my hands.  Mostly. (I still buy CDs, but mostly things not available in the cloud, so I can see that ending eventually.)  Of this batch, I’ve been especially enjoying Amy Ray’s new one – this and her previous one, MVP Live, have finally lifted her solo work right up there for me beside the Indigos; Amy’s created a body of work over the past thirty years that really does have a place in the modern rock and songwriter pantheon.  I’m also continuing to revel in Patti Smith’s most recent decade; her clear strong heart continues to cut to the bone (if you missed Trampin’ go listen right now!).

This time’s “Perfect for Spotify” selection is Ladysmith Black Mambazo and Friends, a two-disc compilation of their many collaborations with other artists through the years, from Paul Simon to Emmylou Harris, Lou Rawls, Betty Griffin, Andreas Vollenweider (yup!), and many others.  Just the kind of album that’s great to hear once or twice, but may not be a necessary addition to your CD collection.  While leaning toward easy listening African music, there’s a new Angelique Kidjo live album, Spirit Rising, that’s well worth checking out.

A more adventurous world excursion is found in the Trio Chemirani‘s Invite, wherein the Persian percussion masters join forces with a diverse crew of string players, including Ballake Sissoko on kora, Sylvain Luc on guitar, Ross Daly on lyra, and Titi Robin on bouzouki.  Way fun!

And to conclude, in keeping with an overall mellow vibe here, two young songwriting founts worth delving into are Bowerbirds The Clearing, a soulful blend of voice and strings that kind of reminds me of local faves Round Mountain, and Anais Mitchell’s Young Man in America, from a quirky and compellingly ambitious songwriter who I’m just tuning into, a decade into her career.

Have you been enjoying the crescent moon this week?  It’s a bit bigger each night, as it moves away from its monthly passage between earth and the sun.

A week or so ago, early risers were treated to a crescent just about this same size, as the moon approached the sun from the other side – it was to the right of the sun as we see it in the sky here in the northern hemisphere, whereas now it’s to the left of the sun.

I missed the show, but those who woke a couple hours before dawn got to see the moon join a lineup of celestial delights: the Pleiades, Venus, Jupiter, and Betelgeuse (one of Orion’s shoulders).

For those in Europe, though, the morning held a special treat: the moon passed directly in front of Jupiter (an “occulation”).  That peaceful ol’ moon moves fast through the starry sky: just about its own diameter each hour, constantly sliding past stars and planets along its way. Just a few minutes after it zoomed by Jupiter, Christian Fattinnanzi caught an absolutely beautiful dance of five moons, a gas giant, and wispy clouds:

Here we see Jupiter and all four Galilean moons (the ones Galileo spotted with his telescope, and visible similarly to his view in any pair of modern binoculars):  Calisto, Ganymede, Io, and Europa.  Lovely!

Love what you love 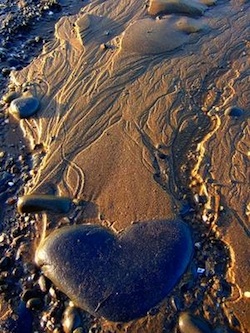 Love what you love,
all the more fiercely because it will not last forever.

Cherish each moment,
all the more precious because grace is fleeting.

Seek not triumph, but balance;
not the straight trajectory upwards, but the circle,
the turning wheel that brings us back to fruitful earth
where the only constant is our continual choice and ability to love.