We turn around and say good morning to the night

It’s another restless night. . . as the hour eases past 3AM, I’m tossed gradually ashore on softly breaking waves of wakefulness, the dark night laced by lightning, the deep hours’ stillness shaken with thunder. By four, I sit in the quiet of the dark living room, tucked into the comfy chair next to the big front windows, cobwebs of late-night torpor stretched across the ceiling corners of my not-quite-awake mind, contemplating the churning sky, this living world, God. 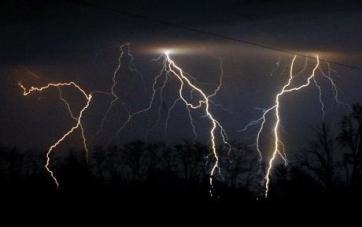 The valley and the trees around my yard are quick-lit for a second of each minute with the electric splash of brilliant directional light from bolts a mile or so away—and a handful of times, half that far, just beyond the nearby hills. The storm moves slowly past, and I become ever more present, eagerly attending to each moment’s turn on stage. After forty minutes, a couple of final blinding flickering bolts, out just beyond Thor’s—eyes widen to take in their fleeting hypnotic pulses, strange and sacred tendrils lingering, shimmering, sky and earth joined in ecstatic connection and release. . . retinal after-images shining for seconds more, slowly fading phantoms dancing across the dimly lit-world outside.

The sky flickers continue in the distance as the storm moves away east, its thunder lost across the miles; another far-off hot spot in the southwest flares now and then as well, while the almost-exactly-full-moon (5:18am) peeks out low in the west, and billowing clouds on the tattered rear edges of the storm are rimmed with its peaceful light.

As dawn approaches—the cloud-draped eastern horizon falling forward toward our ever-present, ever-giving home star—the greys begin to hint at green: contours of the hills around, piñons ringing the yard, gramma and purslaine blanketing the ground, all gaining in detail and color from one moment to the next. A gap appears overhead, opening to allow a bit of infinity to tumble down, four brilliant remnants of the vast night. The only denizens of the deep strong enough to shine through the gathering dawn: distant brilliant huge Rigel, and ancient swollen red Betelgeuse (a knee and shoulder of winter’s soaring hunter, Orion); Aldebaron, the fainter-red eye of the bull of Taurus; and shining brightest of all, the big brother of our solar family, Jupiter, shaper of the verdant destiny of our third rock, via its gravitational grace—holding a space for the inner-planet realm of solid worlds, protecting us from countless cosmic pinballs while letting enough through to seed this would-be Eden with the raw materials for life’s grand experiment. Thank you.

And, after another half hour of earth-spin, this little valley—etched into the foothills of the southern Rockies, these regal ripples rising from the Great Plains—finds its way again to the prow of our spaceship earth. Always and everywhere, these last moments of morning twilight occur at the forward edge of the planet as it arcs patiently ’round the sun, seeking the season yet to come. . . and so here, now, this place once more bids adieu to the shadowed side of our turning ball, and encounters the gentle fresh dawning of a new day. Overhead, cloud puffs float by, a graceful broken quilt of many textures cast in shades of white-to-grey, suspended not far above these warming hills in a sky that has become a soft-blue miracle.