Yesterday morning the front yard bloomed with tiny tinkerbells, shimmering in the sun.  First a few, then dozens, probably hundreds at a time, angling up and across the yard, swept along by a light breeze.  What could it be?  I first grabbed the binoculars by my side, to see if super-vision would help identify them, but they moved too fast. Walking outside and letting them fly toward and over me didn’t improve matters: they were so small, all I could be sure of was that they had four long slender Tinkerbell-ish wings, two on each side. But who were these wings carrying? 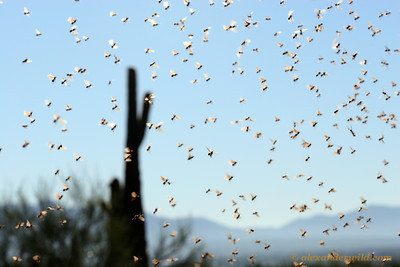 These are larger, leafcutter ants, photographed in Arizona by Alex Wild; click to visit a page on his site with lots of great photos of Flying Ant Day in Tucson

I tried reaching out, hoping to sweep one into my hand on its way by, but each one that came close flitted away, and their bodies were just too small to get a glimpse of.  Finally one bumped and landed on my shirt, and I was able to gently pick it up by the wings, bring it up close to my increasingly enfeebled eyes, and finally see that the heads were decidedly ant-like.  Yes, indeed, no doubt: they were ants!

At the same time, standing out there, I began to realize that they weren’t coming into the yard on the breeze, but were rising up from  the among the tufts of gramma grass stalks now heavy with seed. Looking closer at the ground, I confirmed that indeed our local community of tiny “sugar ants” were on the move, at least some of them.  The ground was littered with them, milling about, making sense of these new diaphanous appendages and preparing to launch up and out into a sudden freedom from the solid, welcoming ground that was all their kin had known til now.

A bit of online research later on brought it all the more into focus.  According to Wikipedia, “‘Flying ant day’ is an informal term for the day on which queen ants emerge from the nest to begin their nuptial flight. In most species, the male ants also fly alongside them, although they are smaller and less noticeable….This phenomenon occurs in many colonies simultaneously when the local weather conditions are appropriate, to reduce the effectiveness of predation and to ensure that the queens and males from different colonies stand a chance of meeting and interbreeding.”  Rick Steinau, on his “Ask the Exterminator” site, elaborates: “They are most often seen a day or so after a hard summertime rain, swarming out of the ground to form massive clouds consisting of millions of individuals.”

Aha!  We had, indeed, had an inch of rain on the day and night preceding, our most concentrated heavy rain of the entire year.  And so this was the day to fly!!!  It takes several years for an ant colony to mature enough to be able to afford to create a “nuptial flight,” but I can attest that the entire surface of the land around here is home to little holes full of these itty-bitty ants. The flying ones I got a good look at were much larger than typical, so must have been the queens; despite their huge numbers, most don’t make it all the way to starting a new colony, or so say the experts.

As I say, these ants are the dominant residents of this corner of the world; they mostly keep to themselves, though each spring there’s a bit of a jousting match as their foraging scouts prod the edges of the house looking for ways in, while I respond to each morning’s intrusions with a variety of blocking defenses, until we re-establish the proper equilibrium – the one where “inside” is for me and “outside” is for them. And I’ll always remember that one glorious afternoon, when the yard was host to an epic battle between the sprawling colony of tiny marauders and a single larger nest of big red ants….perhaps thanks to the element of surprise, the little upstarts quickly gained the upper hand, with many red giants hauled off to ignoble deaths from the lip of the red nest, but the red crew rallied from the recesses and after a couple hours had repelled the invaders.

I suppose if these were the larger species seen in most of the photographs I managed to find online (or–gasp–the big biting red ants), I’d better understand why most of the online info on flying ants amounts to homeowners frantically seeking a way to kill them off and folks like Rick offering their best advice about how to do so – though Rick does take the calmest tone of the bunch, actually comparing the once-a-year flights to Santa Claus!  And indeed on this day I was with Rick on that, simply being swept up one of those fleeting magical moments when of the familiar life in the canyon suddenly reveals a totally unexpected new facet.

Here’s a couple more visual evocations of the moment, though of larger relatives.  First, though these shots are of termites rather than ants, they capture the delicate beauty very well: 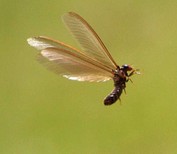 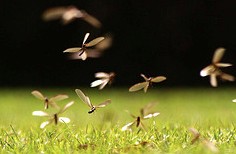 And this video is also pretty wonderful, of meadow ants in Germany.  You’ll have to view it on Wikimedia Commons, as I can’t seem to get it to embed:
http://commons.wikimedia.org/wiki/File:Lasius_flavus.ogv