50 years of seeing the big picture

Fifty years ago this week, John Glenn became the first American to orbit the earth. While we remember this largely as a technological achievement, one of many steps toward flying humans to the moon and robot probes to the planets and beyond, it was also a profound aesthetic, experiential threshold for all of us down below. By the end of the decade, NASA celebrated our forever-changed awareness with the publication of the first book of space photos, This Island Earth (amazingly, still available for spare change from used booksellers!). Glenn and those who followed him into orbit, and on to the moon, remain a vanguard among humanity; they saw with their own eyes, felt with their bodies, breathed with their souls, something the rest of us can only feel in our imaginations.  Their words and pictures have charted a vision of our place in space that we’re still only beginning to live in to.

Alexis Madrigal of The Atlantic put together a short and evocative post that draws on today’s vast library of space images to illustrate some of Glenn’s radioed descriptions of things no American – and only two other humans, Russian cosmonauts Yuri Gagarin and Gherman Titov – had ever seen:

“In the periscope, I can see the brilliant blue horizon coming up behind me; approaching sunrise. Over.” Mission Control replied, “You are very lucky.” Glenn said, “You’re right. Man, this is beautiful.” 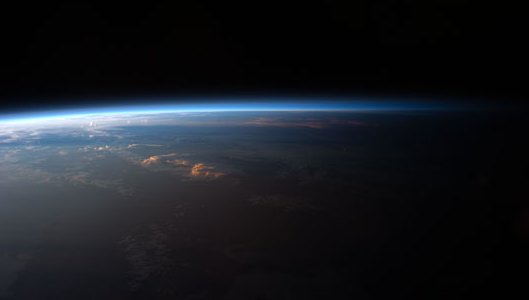 Head on over to read Alexis’s post in full; it’s well worth the couple of minutes it’ll take!!